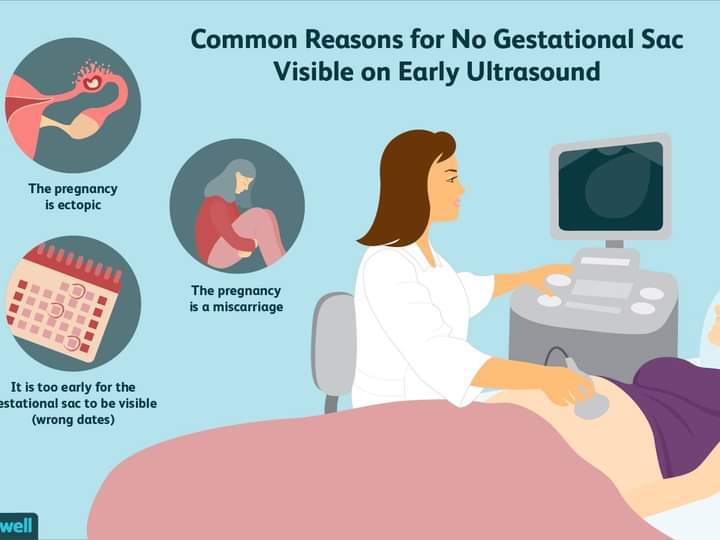 Question
Good day, Doc, I tested positive for blood and urine tests but no sac was seen in an ultrasound. I was told to do a repeat test in two weeks’ time. Please what could have gone the wrong sir?

When Is a Gestational Sac Visible?

Common Reasons for No Gestational Sac

• Having a gestational sac does not say much about the health of your pregnancy, nor does it say whether an embryo is present or not.
• The gestational sac is essentially the sac that surrounds the baby (when it becomes visible) and contains amniotic fluid.
• If a gestational sac is not seen on an early pregnancy transvaginal ultrasound by around 5 weeks gestational age, there are several things that could be occurring.

If a gestational sac is not visible, it could mean that:

What to Do If There Is No Gestational Sac

• It can be difficult for doctors to determine right away which of the above explanations is behind a pregnancy with no visible gestational sac.
• Therefore, it is completely natural to feel concerned and anxious, and perhaps even frustrated.
• You may be told (or see on medical forms) that you have a “pregnancy of unknown location,” which simply means that the ultrasound did not show a gestational sac, and the doctors are not sure whether it is an ectopic pregnancy, a miscarriage, or a very early but otherwise normal pregnancy.
• Most likely, you will be asked to come back for a follow-up ultrasound and undergo monitoring of your hCG levels.
• Together, these repeat tests should give you a clear answer. The wait can be difficult but may be necessary for your doctor to be certain of your diagnosis.
Good Luck