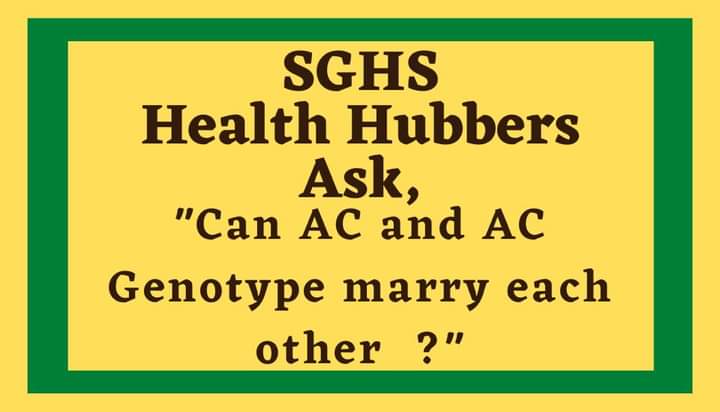 This is simply defined as the genetic makeup of an individual. This is the basic encrypted unique characteristic of an individual.
Your genotype explains your traits. They are actually the collection of genes passed from parents to the children.

Children born of a parent will have different genotype. Exceptions are seen in cases of twins or multiple births that are fertilized from the same egg. In this case, there is a possible of sharing genetic components.

Human beings have two basic components of genes with each pair inherited from each parent.

So before the advent of modern medicine and practices, there was an alarming high infant death rate. Supposedly majority of these children lost to the cold hands of death were referred to as “abikus” or “ Ogbanjes”.
Sad, these kids coulda, woulda all been alive if we knew what we know now. All these happened because there was no knowledge on blood group or genotype.

Today, thank goodness, we are in the light. We know better. We know the mechanisms behind sickle cell disease and also other forms of genotype, blood group related disease conditions.

Prior to know we should not blame people that get married irrespective of their genetic makeup. Before marriage, partners should and matter of fact must be aware of their genotypes and blood group as the society no long provides excuse for this ignorance.

There are evidence based biological explanations on the causes of infant deaths from genotype mixing).

Parents are also implored to check the genotype of their children during pregnancy or immediately after birth. This will help to know the health status of the child and what they have to do to sustain and maintain the child’s health.

⚫️How Many Genotypes do we have?

Practically, there are four major genotypes in humans –

The AC genotype might sound Greek to so many guys out there. But, yes, we have that! Matter of fact I found out when I relocated I was actually AC as against AS! I have always believed I was AS. AC is not so common and popular unlike the other three.

So, S and C are the abnormal genotypes, S stands for the sickle cells. A combination between couples with AS unique genotypes will lead to birthing a baby with SS genotype. Same is applicable when AS crosses with AC!

The knowledge of genotype is important when choosing life partners. Sickle cell disease is completely a preventable condition. Intending couples should know both their own genotype as well as their partner’s genotype at the early stage of their relationship before they are well rooted in love and emotions.

FYI, emotions and time spent in the relationship can cloud people’s judgment or decision to break up if they are not compatible, thus, giving birth to sickle cell children and subjecting themselves and their children to pain, torture and agony.

⚫️ What are the Possible Genotype outcomes in Partners? ⚫️

Based on the explanations given above. Please find below the likely outcome of genotypes.

Generally people with the genotype AA for some not so clear reason are prone to malaria sickness at their early ages.

Sickle cell disease arises when there is any blockage in the blood vessels which inhibits the flow of oxygen. When the red blood cells do not have the required oxygen, there will be changes in its original shape (disc shape) to a “Sickle-like” or “crescent-like shape”, thus, the name “sickle cell”. Sickle cell patients experience severe pains in body parts that lack oxygen flow.
Their bone marrows will fail to produce red blood cells and this result to anemia. To save this crisis, blood is usually transfused to them.
It is important to note that C and S are both abnormal genes and when both exist together will lead to Sickle cell disease. So, a genotype of SS, SC, and CC will present same.

The combinations of AS and AS, AS and AC should not be risked, MUST NOT BE RISKED!!!!!!!!. There is a high probability of having a SS.
Then the BOMB.. On no account should two SS couples marry. Even if you guys are Romeo and Juliet. I implore Individuals with the AA genotype to help our world normalize by marrying the AS, AC and SS.

Hopefully, someday we will wake up to a world where no child has Sickle cell disorder!